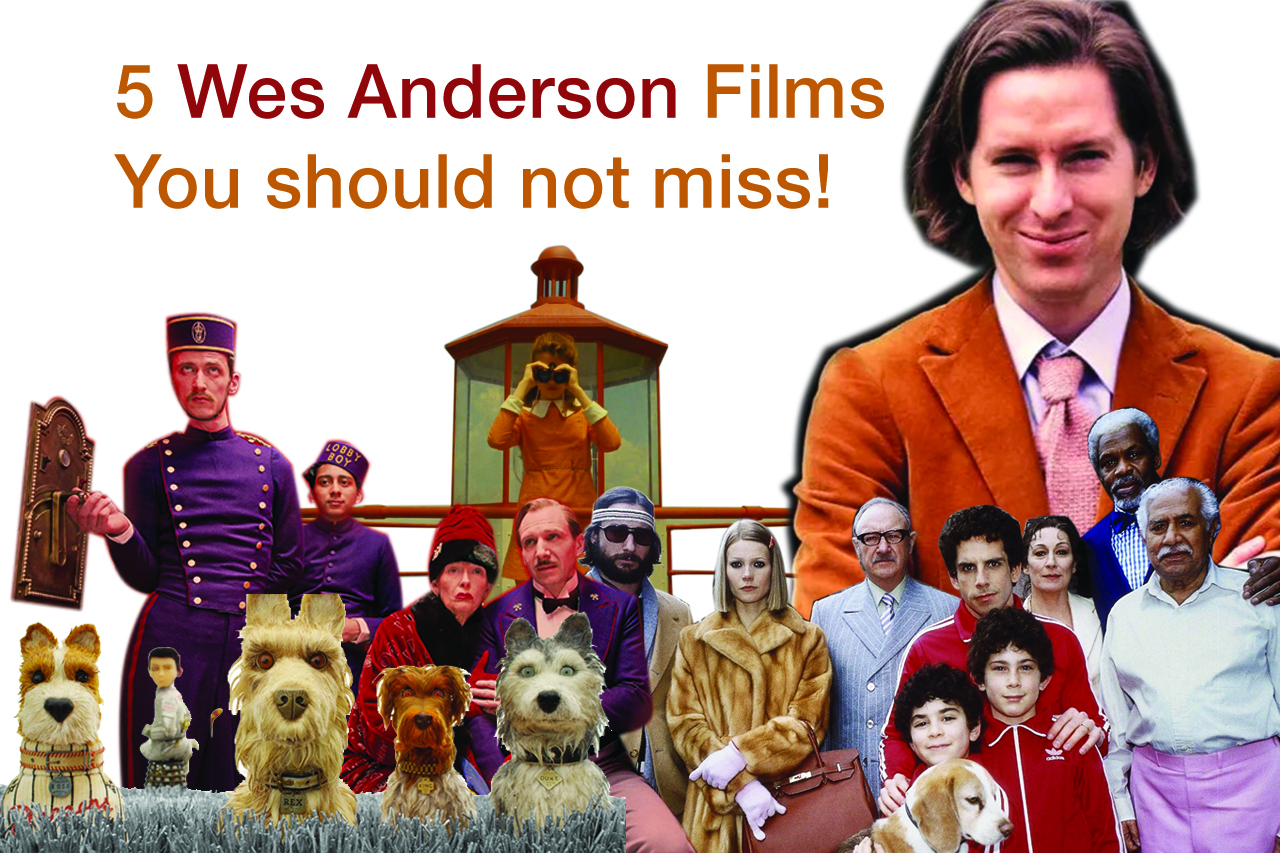 Wes Anderson! A name that echoes in the world of Filmmaking.

A unique visual and storytelling technique that is typical of Wes Anderson shows up in all his films. If you’re a minute observer, you’ll detect a template or a constant structure that defines the vision of this director.

Wes Anderson is considered the master of Mis-en-scene. His unique style makes his film sets, sound design, types of shots and actors elements of symmetrical cinema. He establishes an equilibrium in all his films to engage with the audience on a conscious level.

With Scorsese, its violence. With Nolan, its time. But with Anderson it’s all about Broken Dreams and Shattered Families. He pinpoints the emotional connection between family members, and puts out a resolution that eventually gives the story an end it deserves.

Today, we are going to talk about five famous films of Wes Anderson, and how his films have become a part of Cinema History.

Three estranged American brothers reunite in India on a train called the Darjeeling Limited — a detailed set of a train moving through the real countryside, a perfect backdrop of texture. The story centers in on the characters undertaking this soul searching  train journey in an attempt to connect with their mother. A spiritual journey across India, which put their lives in perspective.

A film both beautiful and strange at the same time. The way Wes Anderson used the culture to portray self-actualization by finding deep emotional resonance in the vibrant setting of India is astonishing.

And to praise Anderson’s attention to detail: There were 900 elephants throughout the film – each hand-painted pachyderm manifests on the walls of the train that provides the film’s primary setting.

This is the perfect film to kickoff Wes Anderson Movie Marathon.

A Ben Stiller starrer family drama that explores the reunite of three siblings when their estranged father announces that he is dying.

The film’s setting is elusive, set in the late seventies in New York. The story revolves around a towering house, where all the members of Tenenbaums family lives.

Royal Tenenbaum (Gene Hackman) and his wife, Etheline (Anjelica Huston), had three children—Chas, Margot, and Richie before going their separate ways. Chas (Ben Stiller) started buying real estate in his early teens and seemed to have an almost full understanding of international finance. Margot (Gwyneth Paltrow) was a playwright and received a Braverman Grant of $50,000 in the ninth grade. Richie (Luke Wilson) was a junior champion tennis player and won the U.S. Nationals three years in a row. All of the brilliance of the young Tenenbaums was subsequently erased by two decades of betrayal, failure, and no interpersonal communication. The Royal Tenenbaums is a hilarious, touching, and intelligently stylized study of a dysfunctional family and its redemption by Wes Anderson.

Isle of Dogs is a 2018 stop-motion-animated science-fiction comedy drama. This is the second stop motion film made by Anderson after Mr. fantastic Fox. Although Mr. Fantastic Fox had its own quirkiness as a film, Isle of Dogs tops it with a story set up in the near dystopian future of Japan, where all the dogs are banished on a garbage island following the outbreak of a canine flu.

A boy in search of his dog visits the island and is helped by a group of dogs to find his pet. The film is funny, heart-warming, and is full of intelligent exchange of dialogue between the dogs. This film is a must see, to have a loving understanding of our furry friends’ feelings towards us.

A masterpiece by Anderson. The film revolves around a murder in Grand Budapest Hotel, which looks like a fully detailed doll house, wherein a concierge is wrongly framed for the murder, and in the process to prove his innocence befriends a lobby boy.

The film is visually contrasting with a great eye for detail in each and every shot.

The film’s incredible locations, interiors and old-fashioned matte-painting backdrops gives the film a cozy environment not unlike that of an illustrated page from a book.

Wes Anderson explores the depth and confusion of humans towards each other in this brilliant piece of cinema.

The most innocent and best ever film of Wes Anderson. It’s innocently romantic, warmly funny, and a robust story of young love on the run from society.

This is the story of Sam, a 12-year-old orphan who falls in love with Suzy. The two decide to run away to a secluded cove on an island, prompting the entire town to begin a search.

A passionate storyline, that holds together the sturdy stance of young lovers and learnings of older lovers.

The film has a perfectly polished plot, exploring teen love in all its awkwardness and excitement, with a good measure of humour.

A well-written story, delightful soundtrack and applause worthy performance by the cast with its quirky and beautiful nuances, this one should definitely make it to your Watch list.