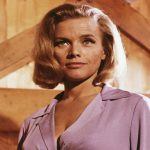 English Actress Honor Blackman, best known for her roles as Cathy Gale in “The Avengers” and Bond girl Pussy Galore in “Goldfinger,” died of natural causes at her home in Lewes, Sussex. She was 94.

Her family confirmed her death in a statement given to USA TODAY on Monday by spokesperson Jennifer Withers.

The family statement read, “It’s with great sadness that we have to announce the death of Honor Blackman aged 94. She died peacefully of natural causes at home in Lewes, Sussex, surrounded by her family,”.

The family Statement further read, “She was much loved and will be greatly missed by her two children Barnaby Kaufmann and Lottie Croft, adopted during her marriage to Maurice Kaufmann and her four grandchildren.”

The statement continued, “As well as being a much adored mother and grandmother, Honor was an actor of hugely prolific creative talent; with an extraordinary combination of beauty, brains and physical prowess, along with her unique voice and a dedicated work ethic she achieved an unparalleled iconic status in the world of film and entertainment and with absolute commitment to her craft and total professionalism in all her endeavors she contributed to some of the great films and theater productions of our times.”

Piers Morgan took to social media to pay tribute to the late star. “A wonderful actress, and my favourite of all the Bond girls when she played Pussy Galore in Goldfinger,” he tweeted. “Her family said she was ‘an extraordinary combination of beauty, brains and physical prowess’.

Michael G. Wilson and Barbara Broccoli – James Bond producers – said: “Today we mark the passing of a film icon, Honor Blackman who shall forever be remembered as Pussy Galore in Goldfinger. She was an extraordinary talent and a beloved member of the Bond family. Our thoughts are with her family at this time.”