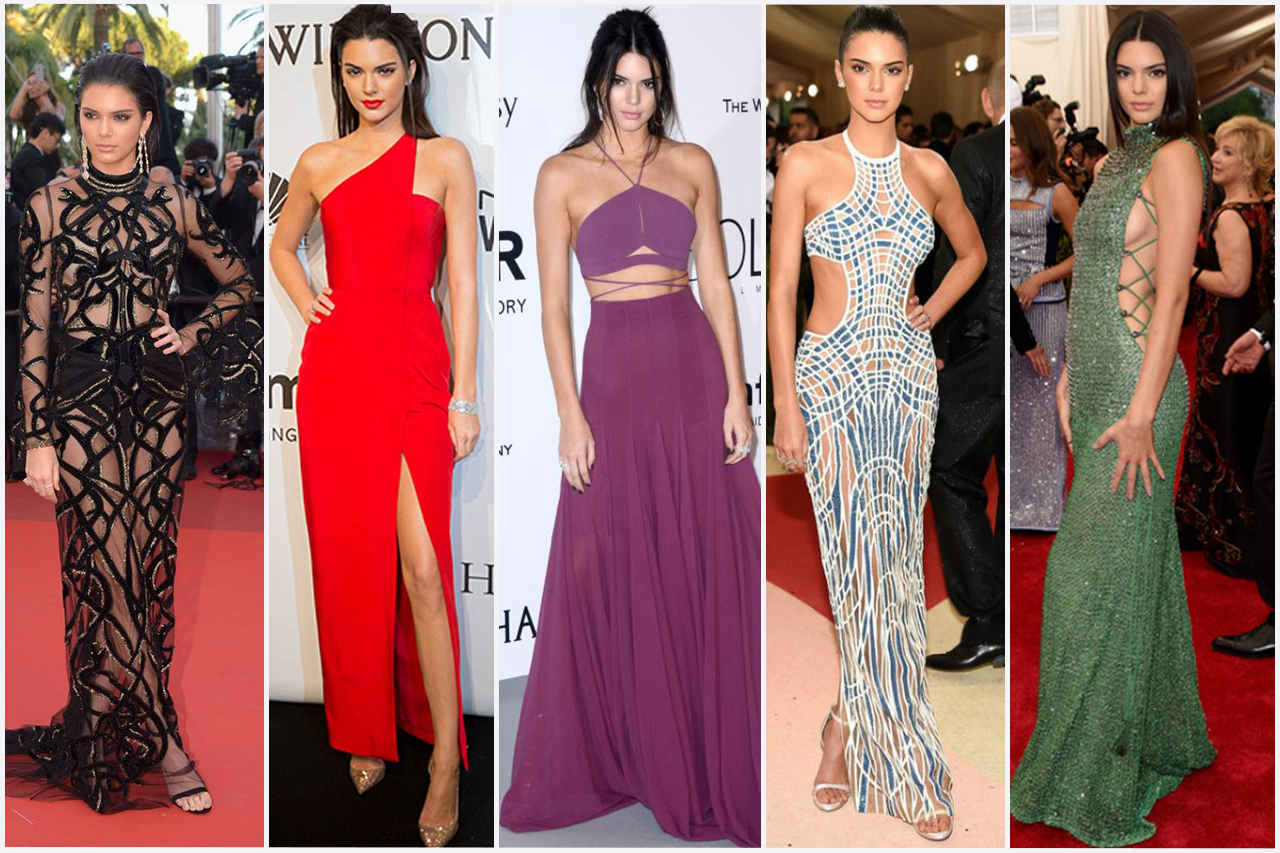 Kendall Jenner is the hottest name in the fashion world today! Not only has she made waves on the runway, but her street style game is goals.

Be it a formal attire or something to do with her favourite sheer ensemble, Kendall nails it all effortlessly. Turning heads on the cover page of almost every magazine, Kendall is every designer’s favourite and is always booked for gigs with high profile designers like Fendi, Chanel, Dior and Versace.

Here are the sexiest red carpet looks sported by Kendall Jenner that will give you major fashion goals.

At the 2016 Cannes Film Festival, Jenner wore a cutout Roberto Cavalli dress with serpents like the Mistress confidante.

Kendall is a fan of showing skin as apparent in the cutout Roberto Cavalli dress she wore to the 2016 Cannes Film Festival. What looks like black velvet scrolls are actually silky serpents that come to a head at the top. Looking like a tempting mistress herself, the Mistress confidante features menacing and mesmerizing gold leaf serpents, embodying an exotic, untouchable yet sensual aura.

Looking polished and refined, Jenner chose a simple black Vivienne Westwood gown with plunging neckline for the White House Correspondents dinner in 2016. Equally sleek and polished, is the black and gold Chandra barstool, for the most decadent bar you have ever seen.

Kendall in Versace at the 2016 Met Gala and the Gem Table Lamp.

Who can forget the Versace stunner gown Kendall Jenner wore to the 2016 Met Gala? The pale blue, nude and white cut-out dress made a statement and looks similar to the Gem table lamp, featuring the ever-trending geometric look in the aged brass base, constructed around a coloured glass jewel.

Kendall Jenner in 2014 at the British Fashion Awards in Emilio Pucci, and the Chandra chair.

Kendall Jenner mixes it up with a crisp white Emilio Pucci jumpsuit with tantalizing black stripes down the side, worn at the British Fashion Awards in 2014. Also looking sleek and sexy in crisp white is the glamorous Chandra chair.

Jenner at the amfAR Gala in a vibrant red Romona Keveza gown and the Brilliance sconce.

At the 2015 amfAR Gala, Kendall Jenner stepped out in a vibrant red Romona Keveza gown with a seductive thigh high, side slit. Just as vibrant as Jenner, the Brilliance sconce’s radiating design features a pure, natural agate slice in the center, highlighting the beauty of the natural stone as the light shines through.

Jenner in a jade Calvin Klein gown at the 2015 Met Gala, and the Envy chaise.

At the 2015 Met Gala as the new face of Calvin Klein, Kendall Jenner stepped out in a breath-taking jade green crystal-encrusted gown by the designer featuring cutout side slits that she loves so much. The Envy chaise looks absolutely envious upholstered in a jade green similar to Jenner’s.

Jenner again in Calvin Klein at the amfAR Cinema Against AIDS Gala in 2015, and the Le-le bench.

Again at the amfAR Cinema Against AIDS Gala in 2015, Jenner showed off her toned midsection in a cropped, orchid-coloured Calvin Klein gown. Her radiant orchid hue matches the velvet upholstery of the luxurious Le-Le bench.

Which is your favourite red carpet look sported by Kendall Jenner? Share it with us in the comments section.

Riteish and Genelia- The cutest couple of Bollywood